Our goal is for victories in individual cases to bolster organizing and improve workplace conditions.

Justice at Work’s attorneys provide direct representation to workers referred by organizers and worker center staff. We also serve as a liaison between private attorneys, workers, and worker centers. And we engage in legal advocacy to help develop effective remedies and improve access to justice for workers. 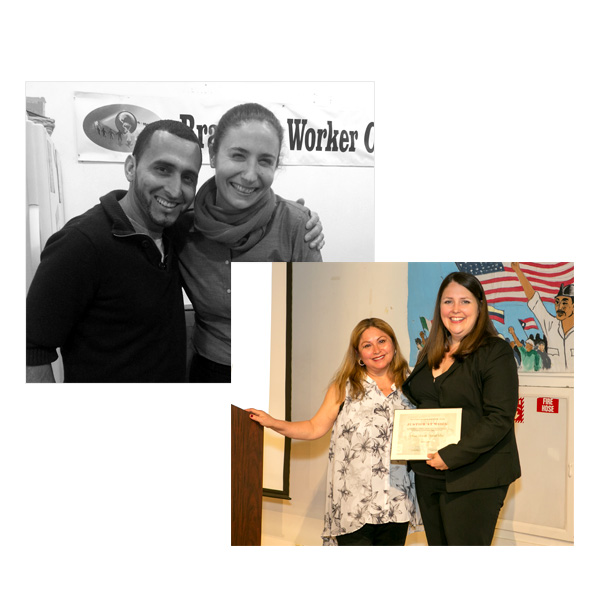 Since 2011, Justice at Work has provided legal services to 1,300 workers facing wage theft, injury on the job, sexual harassment, discrimination, retaliation, and more. We have helped obtain more than $6.5 million on these workers’ behalf.

In cases that worker centers identify as strategically important, Justice at Work provides direct representation. Our watershed victories include:

In 2016, Justice at Work filed a charge with the National Labor Relations Board on behalf of 12 workers who felt retaliated against when they were fired from a seafood plant after collectively raising issues about working conditions with the plant’s management.

Justice at Work settled the charge, earning the workers backpay for their time out of work and reinstatement. The workers report improved conditions, including nicer facilities and enjoyment of their basic rights to earned time off. They continue to fight for greater respect of female workers, with support from Centro Comunitario de Trabajadores and Justice at Work’s legal team.

At the beginning of 2012, a group of Massachusetts worker centers were successful in winning a written commitment from a large temp agency to provide paid vacation to workers. When the temp agency failed to live up to that promise, Justice at Work and co-counsel Fair Work, P.C. filed a class action to force the company to pay the workers’ stolen wages.

While interviewing workers in the case, our staff identified that the temp agency had also assigned workers long hours on multiple job sites, but failed to pay them overtime when their combined hours exceeded 40 hours per week. With Fair Work, P.C., we filed a second successful class action. Together, these cases sent a strong message to temp agencies across the state: workers will hold agencies accountable to their commitments, and schemes to cheat workers out of wages will not be tolerated.

In 2016, a group of residential construction workers approached the Brazilian Worker Center for help recovering tens of thousands of dollars in stolen wages. While the Brazilian Worker Center applied community pressure on the contractor, Justice at Work filed mechanic’s liens to protect the workers’ right to be paid. We teamed up with Levine-Piro Law, P.C., to file in court to perfect the liens, demand over $52,000 in wage, and freeze payments owed to the contractor by a developer. This was the first time Justice at Work successfully interfered with an ongoing project. The combination of community and legal pressure led to workers being paid in full.

Justice at Work partners with the private bar to ensure high-quality legal service for all workers. We assemble attorney referral panels and incentivize private attorneys to take a range of labor-and-employment matters. Our staff perform case intake, investigation and legal research. We then summarize the case for the interested attorney. We also accompany workers in their initial meetings with the attorney and serve as a liaison between attorney, workers, and worker center staff as cases proceed and as attorneys navigate linguistic and cultural barriers to effective representation.

“Before coming to the Brazilian Women’s Group and Justice at Work, I felt threatened by my former employer and co-workers. My own attorney seemed uninterested in investigating my case and more understanding of the other side. Now, I feel supported and I have an attorney who fully represents me.” 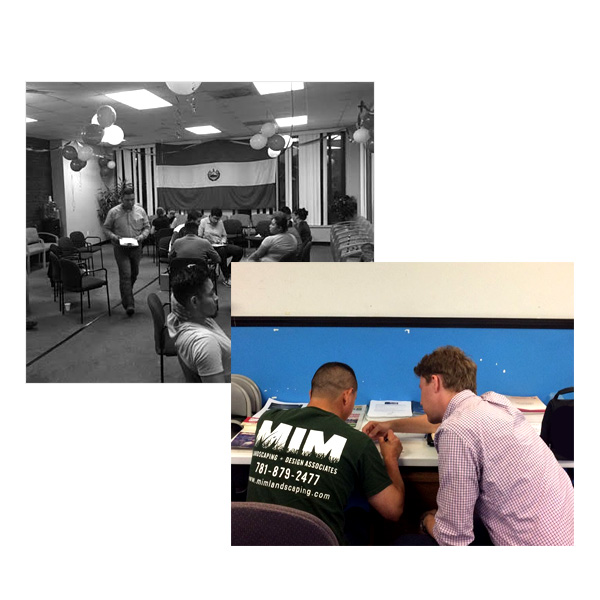 Wage theft has reached epidemic levels in Massachusetts, with employers stealing wages from an estimated 350,000 workers in low-paying jobs per year. The state government is unable to keep pace, while many of these cases are not economically viable for the private bar. As a result, worker centers are inundated with people seeking redress for small claims.

To fill these gaps in access to representation and to lower barriers to justice, Justice at Work has pioneered the use of small claims court to resolve wage theft claims. Our Executive Director Thomas Smith began training worker center organizers and workers on the small claims process when he founded Justice at Work in 2011. Encouraged by early successes representing workers in small claims divisions across Eastern Massachusetts, Justice at Work then partnered with Greater Boston Legal Services and the Volunteer Lawyers Project to initiate an effort in the Small Claims Division of the Boston Municipal Court, Central Division, to place wage theft cases on the same docket and hear them together on two set days a month. Small claims court is proving to be an important venue through which workers can more quickly win owed wages while still being able to receive automatic treble damages and reimbursement for litigation costs under the Wage Act.

Join Us In Taking A Stand
Everyone deserves to go to work, be paid fairly for their labor, and return home to their families with their health and dignity intact. Donate today to make that a reality.

Know your work-related rights during the coronavirus